Secretary of State Rex Tillerson said Friday that the Trump administration wanted to refocus the U.S. relationship with Africa squarely on trade and investment, to help unlock the tremendous potential of what is expected to become the world’s most populous continent in coming decades.

“By 2050, the population of the continent is projected to double to more than 2.5 billion people, with 70 percent of that population being under the age of 30,” Tillerson said. “All of these young people will have expectations for entering the workforce.”

Tillerson noted a more vibrant and economically competitive Africa would grow the middle class, increase standards of living and make the entire continent more prosperous. He made the remarks ahead of ministerial talks with foreign ministers and representatives of 37 African countries at the State Department in Washington.

Tillerson: US Seeks to Unlock the Potential of a Growing African Continent

“I have not had the chance during my time as secretary of state to travel to the continent,” Tillerson said. “In my prior life, I came to your continent a lot, and I visited many of your countries. But I do look forward to coming early next year.”

Before becoming the chief U.S. diplomat, Tillerson was the chief executive of energy company ExxonMobil.

On Friday, he noted U.S. exports to sub-Saharan Africa grew from $17 billion in 2010 to more than $25 billion in 2014. Tillerson said that last year, U.S. direct investment in Africa grew to $57.5 billion, the highest level to date.

“Africa is a growing market with vast potential. Five of the world’s 10 fastest-growing economies are in Africa, and consumer spending there is projected to exceed $2 trillion by the year 2025,” he said.

The secretary of state noted economic growth and lasting prosperity, however, can thrive only in environments of good governance.

Tillerson said Friday’s talks would focus on how lasting peace and prosperity are undermined when governments fail to respect human rights and uphold the law. He said a peaceful transition of power is important, but democracy involves more than just holding fair elections. 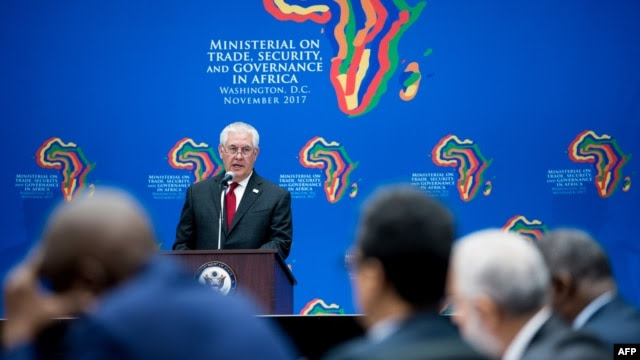 U.S. Secretary of State Rex Tillerson speaks during a meeting of African leaders at the State Department in Washington, Nov. 17, 2017.

“Democracy requires the inclusive, peaceful participation of a nation’s citizens in the political process,” Tillerson said. “That includes freedoms of expression and association, an independent press, a robust and engaged civil society, a government that is transparent and accountable to all of its citizens, and a fair and impartial judiciary.”

Rex Tillerson Calls for a Return to Civilian Rule in Zimbabwe

Tillerson said the United States also stood with its African partners to work to defeat what he called the scourge of terrorism and to address the root causes of violent extremism. He said the U.S. was helping 20 African countries to train, deploy and sustain more than 27,000 African peacekeepers this year in United Nations and African Union missions.

The secretary also urged African countries to help isolate North Korea, which he called a threat to all nations, by acting to implement U.N. sanctions in full, and cut off all U.N.-proscribed ties.

“I urge you to take additional measures to pressure the DPRK by downgrading your diplomatic relationships with the regime, severing economic ties, expelling all DPRK laborers and reducing North Korea’s presence in your country in all other ways it may be found,” he said.

Friday’s African ministerial meeting comes as Tillerson has been under increasing fire from a number of U.S. lawmakers for what they say is turmoil at the State Department, citing career foreign service leaders who are leaving in large numbers because of budget cuts and morale issues. 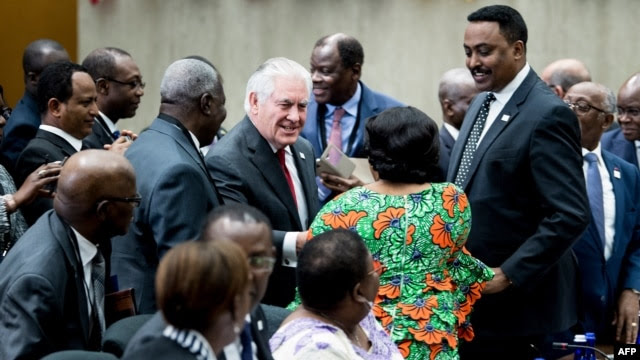 U.S. Secretary of State Rex Tillerson greets participants during a meeting of African leaders at the State Department in Washington, Nov. 17, 2017.

Africa expert and former U.S. Ambassador John Campbell told VOA the fact that the secretary was hosting such a major meeting of African leaders was good, but he noted the Trump administration still has no signature issue for the African continent.

“My concern about the Trump administration’s approach to Africa is its failure to fill important policy positions such as the assistant secretary of state, its failure to nominate ambassadors to important African countries, such as South Africa, and the threat of massive cuts in the State Department and USAID [U.S. Agency for International Development] budget will severely curtail assistance programs in Africa.”

“I would suggest President George W. Bush had even more enthusiasm for Africa than President Obama did. He went there, I think, three times. His wife, Laura Bush, went more often,” Campbell said. “And he gave every indication of being absolutely fascinated by the continent and recognized how important the continent was.”

Asked about how Trump was perceived in African nations, Campbell said views were mixed.

“Some Africans admire the president’s ‘big man’ style, you know, the bluster, the larger-than-life persona. This after all is a political style that has been fairly common in Africa in the past,” the former U.S. diplomat noted. “Others, however, are concerned about the president’s position on things like climate change, and what they see as an over-readiness to invoke the use of military force to solve problems.”